Leeds is one of the UK's largest cities and home to England’s biggest financial centre outside of London. Forecast to see 25 per cent growth over the coming decade – now is a great time to be looking for a job in Leeds. 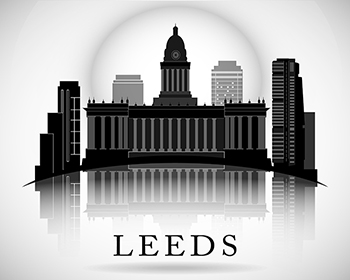 With a population of around three-quarters of a million people, Leeds is one of the UK's largest cities and home to England's biggest financial centre outside of London. Forecast to see 25 per cent growth over the coming decade – with finance and business services making up half of that – now is a great time to be looking for a job in Leeds.

Read on to discover some of the strongest sectors and job opportunities in our latest city guide.

Once famous for textile production, Leeds has successfully transitioned from post-industrial decline to become one of the stars of the much-vaunted "Northern Powerhouse".

Productivity measured in GVA (gross value added) is among the highest in the UK at £45,460 per filled job – putting Leeds behind only Bristol and Glasgow among the nation's core cities.

The service and financial sector is particularly strong, as is healthcare and medical technology, housing and construction, retail, manufacturing, and media and digital technology.

The city's central position within the UK makes it a popular choice as a company HQ – with supermarket giant Asda, the First Direct bank, outsourcing behemoth Capita and Northern Foods all calling Leeds home.

Boasting four universities, Leeds has the fourth-largest student population in the country – and the education sector employs a healthy number of academics, administrative and support staff.

'There are some great universities in Leeds which produce a strong talent pool - and people tend to want to stay in the city. It's more affordable than London and a lot of talented people appreciate the lower cost of living and property,' explains Dominique Simcox, Marketing manager for MEPC – the company behind the city centre's high-profile Wellington Place business park.

The city centre has undergone massive change in recent decades and there are more developments in the pipeline. The Victoria Gate development in the Victoria Quarter will bring 42,00sq m of retail and leisure space to the city – and will be home to a landmark John Lewis store set to open in the autumn, creating 1,000 retail and hospitality jobs.

Central Square, close to the train station, will be home to a swish-looking new glass-and-steel development of retail, leisure and office space opening later this year, while the huge Wellington Place development will provide further office space.

As well as boosting the construction industry, such developments are encouraging new employers to the city, as Dominique explains: 'the city is more affordable for companies looking to relocate – and they can still be in London in two hours on the train. An increasing number of organisations are moving their headquarters here as they find it easier to attract and recruit talent. Professional services and the digital industries are probably the fastest growing sectors at the moment.'

Engineering professionals are amongst the most sought-after workers in the city, according to Annabel Lewis, permanent recruitment consultant at Headway Recruitment.

Around 30,000 people work in manufacturing in Leeds – with 135,000 employed across the wider city region – and there is increasing demand for qualified engineers.

Annabel explains: 'Candidates were not moving jobs due to insecurity within the industry and fewer people have been entering the sector for the past five or six years during the recession.

'This, coupled with the fact that there were no apprenticeship opportunities for young people, has created a generation gap - as for a while young people didn't see engineering as an area with good career prospects.'

While things are starting to change now that the government has introduced its apprenticeship scheme, training people takes time. According to Annabel, 'good mechanical engineers are in particular high demand in Leeds.'

Big names moving to Leeds include upmarket fashion house Burberry – which will be opening a new production facility in the city by 2019 to produce its trademark trenchcoats, creating 200 jobs.

Less glamourous, but equally economically significant, manufacturers in the area include bus maker Optare and the Stephenson Group, a chemical firm which has transitioned from serving the textiles industry to making products for paper recycling.

While not as big as some sectors, the digital industry is growing in Leeds – with an increasing number of vacancies popping up with small and large organisations.

Organiser Amy De-Balsi, who also runs digital jobs board Herd, commented: 'It's predominantly SMEs but we have some really big companies in Leeds too. Sky have moved their support functions here and the city also hosts back-office functions for some major financial institutions. NHS England has a large base here and the Department for Work and Pensions also has a big presence.'

According to Amy, demand is highest for developers, project managers and data analysts.

She adds: 'Leeds is a hugely attractive place for employees. It's just 40 minutes from the countryside to the city centre and there's a thriving nightlife scene with loads of new bars opening all the time.'

Whether you're a web developer, CNC machine operator or an accountant, it's worth giving Leeds a second look in your job search.