If you’re thinking of starting your job search in Cambridge, read on for an overview of opportunities in the city’s technology, life science and construction industries. 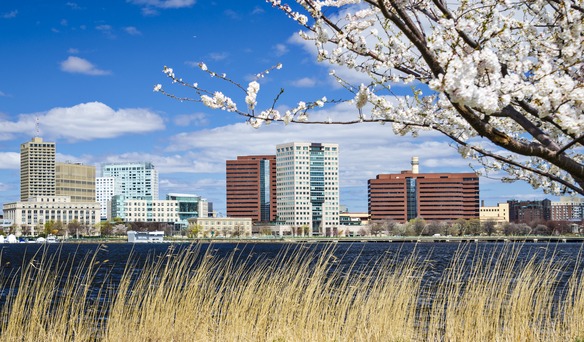 Cambridge has enjoyed phenomenal success over the last 40 years, transforming itself from a prestigious university town into one of the biggest technology and biomedical clusters in Europe. Today, Cambridge is one of the few UK cities driving national economic growth. According to a recent Centre for Cities report, an impressive 12,400 jobs were created in the city between 2004 and 2013 – almost a third of them in knowledge-intensive industries.

Last year, Cambridge had the second highest employment rate (second to Warrington) and the lowest number of people claiming Jobseeker's Allowance of any UK city. Unsurprisingly for a university town famed for innovation, it also boasts the highest number of residents with high-level qualifications and the highest number of patents granted per 100,000 people. Not only are Cambridge workers the most highly-skilled in the country, they also earn some of the highest wages. The average tech professional earns £42,004 – the highest in England, outside of London.

If you're thinking of starting your job search in Cambridge, read on for an overview of opportunities in the city's technology, life science and construction industries.

Cambridge employs more than 53,000 tech workers and is home to 1,400-plus technology firms, ranging from high-growth start-ups, which spring up across its many science parks each year, to well-established companies. Big name players include Hewlett-Packard-owned software developer Autonomy, technology group Aveva, and computer-chip designer ARM.

The city is a hotbed for start-ups, but it's not just smaller companies that are creating new job opportunities. Many of the big multinationals are continuing to grow, such as ARM for example. The £15 billion company ranked third-most innovative company in the world by Forbes, is set to expand its HQ site at Peterhouse Technology Park next year, doubling its workforce to 2,500.

The city's newest and most exciting arrival is Apple, who recently opened an R&D centre at 90 Hills Road, employing around 40 staff. In contrast, Microsoft has been established in the city for years, having opened its research centre in 1997, which now has around 100 people working on site.

Other billion-pound companies with interests in the city include Amazon, which bought Cambridge start-up Evi Technologies to develop its drone technology, and Google, which bought the city's artificial intelligence group, DeepMind.

The East of England is home to more than a third of the UK's life sciences organisations, with a turnover of between £8bn and £10bn. Cambridge boasts more than 750 life science companies, accounting for some 15,000 UK jobs.

One of the city's biggest success stories is AstraZeneca. The pharmaceutical giant is set to build a £330m global research headquarters on the Cambridge Biomedical Campus near Addenbrooke's Hospital. On completion, the development will create 2,000 jobs and become the biggest medical-science centre of its kind in the world.

Thanks to impressive foreign investment and Government funding, the speed of growth shows no sign of slowing. The city's Babraham Research Campus, for example, houses some 50 biomedical start-ups and has attracted £50m of Government investment over the past three years.

It's not just the technology and life science sectors providing job opportunities. Construction projects in the East of England are expected to create some 4,260 new jobs each year, according to the Construction Industry Training Board (CITB).

While the industrial and commercial sector is driving growth (such as AstraZeneca's new headquarters), the public and private housing sector is also buoyant. According to property consultancy Bidwells, around 700 new homes were built in Cambridge each year between 2010 and 2013. Between 2013 and 2014 that number increased to 1,270. If planning consent is granted to schemes currently in the pipeline, those figures will climb even higher.

Cambridge has ambitious housebuilding plans. The city has set itself the target of building 35,000 new homes by 2031. More than half of these will be outside the city itself – including 8,500 new homes at Waterbeach village and the creation of new settlements at Northstowe and Cambourne.

In a city where house prices are rocketing and planning permission is strict due to green belt restrictions, Cambridge University has taken the unusual step of releasing some of its own land holdings. The billion-pound North West Development will see the construction of 3,000 new homes, half of which will be made available as affordable housing for university key workers, as well as a hotel, community centre, supermarket, and school.

Whether you're a technology or life science candidate, or looking for work in the construction industry, job prospects in Cambridge look promising for many years to come.

Interested in working in Cambridge? Find Jobs on CareerBuilder.co.uk!