How to land a job in gaming

Competition for jobs is fierce. If you're hoping to enter the games industry, here's how to land your first job 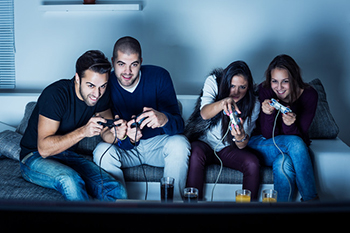 The UK has long been a leading force in the world videogames industry - from the 8-bit heyday of the 1980s, right through to Edinburgh-based Rockstar North's Grand Theft Auto V generating a staggering $800m within 24 hours of its release in 2014.

But as you'd expect from a global industry now making more money than Hollywood, competition for jobs is fierce. If you're hoping to enter the games industry, here's how to land your first job.

One of the best ways to get a foothold in the industry is to start with a position in games testing.

But forget idle fantasies of getting paid to blast your way through the latest unreleased shoot-em-up, because the actual work is more likely to involve repeatedly running into a corner in a bid to replicate a bug reported by somebody else.

If the less-than-glamourous reality hasn't put you off, then you'll need an analytical mind and a methodical approach to tackle the work involved. Some form of higher education is usually required, such as a degree in a gaming-related subject.

'In a small studio like ours, the QA team interacts with all the other departments on a daily basis, which helps industry newcomers quickly get up-to-speed on how development works in the real world.

'Working in testing provides perhaps the clearest understanding that every single thing you do when creating a game has ramifications and knock-on effects that you might not have considered.

And that's an incredibly valuable foundation to have when moving into any other department.'

When it comes to getting a job, it's a good idea to send targeted speculative queries – asking for your CV to be kept on file – as well as applying for positions that you see advertised.

If you fancy a job in the engine room of games development then you're going to need a degree in maths, physics or computer science, and take as many maths and programming modules as possible. A games-specific degree could also be a good option.

Qualifications are only the start. You'll also need to show your dedication to the industry by creating a playable demo of your programming skills, and be able to demonstrate an understanding of how programming translates into the games that you play.

As well as top-notch coding skills in C/C+++, you'll need good communication skills and to be a "team player", as games development is an intensely collaborative undertaking.

While most companies offer a laidback environment, the work will be hard – with long hours expected as deadlines loom.

Standards of animation in current games are at a staggeringly high level, with effects and production values to rival the movies in some titles.

To get into the industry you're likely to need a first or higher level degree in animation, though junior positions can sometimes go to people who haven't attended university but do have real talent and some specific training.

Your showreel will be of vital importance in securing a job – so make sure it's the best it can be. Just put your finest work on it and resist the temptation to show off too much. It's better to specialise in one area, than try to be a master of everything.

It's also good to show an understanding of trends in the industry, such as motion capture, and how animation fits into the overall job of games development.

Development studios sometimes recruit specialists in audio, in art and design, in scripting and in support functions like project management, admin and finance.

Publishers will require admin staff, as well as experts to work in marketing, media relations and general business roles.

If you're interested in a non-technical role, it's still important to show an understanding of and enthusiasm for the gaming world – perhaps using evidence like a blog, if you are going for a PR role, for example.

Whichever route you are hoping to take, Melissa Knox has some hints and tips to help you notch up a high score with potential employers.

'A well-written cover letter is key for standing out,' she says. 'We get a lot of applications - some for specific vacancies, some speculative - and the ones we talk about internally are almost always the ones that have taken the time to research Blazing Griffin and tell us why they would be a good fit for our team.

'Please don't send us the standard "I work well both individually and in a team" statements and expect to stand out from the crowd. Tell us about yourself! What games do you like to play? What else do you do in your spare time? What's your favourite burrito filling? Anything that will get us talking about you.'

She also advises making sure your spelling and CV formatting are exemplary – send it as a PDF ideally – and try not to cram in too much.

'If you can't boil down your most relevant work and life experience to a few pages, the perception will be that you aren't great at concisely communicating key points - which is obviously an important skill in game development and in working within a team.'

How to land your first job in accountancy

Over a fifth of all vacant graduate jobs are within the accountancy and professional services sector, making it the largest employer of new graduates in the UK, according to figures from the Association of Graduate Recruiters. While there are many opportunities, there are also large numbers of graduates and professionals targeting careers in the industry – which means competition for jobs can be tough, particularly for those just starting out.Read on for our guide to the different routes into accountancy, where to find your first job, and how to stand out from the crowd.Different routes into accountancyThere are several possible routes to enter the profession. 'You could start out by studying for a university degree; a degree in accounting or economics is an obvious one, but individual companies may have routes into working with them for people with different degrees,' says Olivia Hill, AAT's Chief HR Officer.While you don't need a degree to become an accountant, most employers will...

How to land a job as a personal assistant

Forget Mad Men-style secretaries and typing pools. Today's top-flying personal assistants (PAs) and executive assistants (EAs) are managing big budgets and making key business decisions. Whether you're just starting your job search or keen to advance your career, here's what it takes to succeed in the role. Changing nature of the jobIf you think being a personal assistant means doing a bit of diary management and typing, think again. 'The role of the PA has moved away from being a traditional "secretarial" role - i.e. typing, filing and producing documents - to one that is all about organisation and logistics,' says Elaine Sutherland, Managing Director of specialist PA recruitment consultancy PA London.'Some sectors still rely heavily on their PAs to produce lengthy documents and contracts, but others see their PAs acting as a pivotal member of the management team, keeping them on track and helping their schedules to run as efficiently as possible. They will their spend time as pred...

How to land a job in the hospitality industry

Hospitality is a people-orientated industry with customer service at its heart. Whether you choose to work in accommodation and food services, health and fitness, or bars, clubs and pubs, there are great employment opportunities available to those who have a passion for people and service.Academic qualifications vs experienceThere are many routes into hospitality jobs and you don't always need qualifications to get them. Some people start with on-the-job training while others complete a graduate scheme, and then go on to gain extra qualifications as they progress.Ben Bengougam, Vice President of Human Resources for Hilton Worldwide says: 'Academic qualifications have their place, particularly when the degree has included practical time in industry and provides a managerial entry point and fast track to senior roles. However, nothing can ever be better than work experience, time spent learning and doing the job or delivering brand propositions and customer service through all of the ...