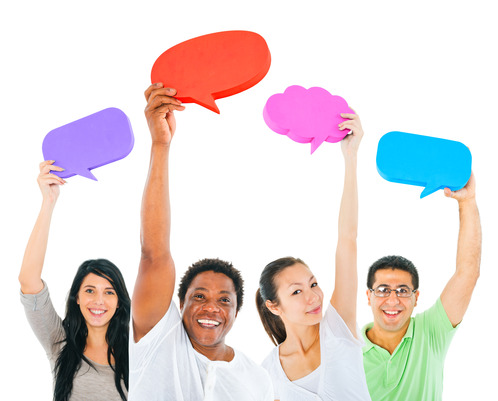 Do you want to get your message across, persuade others to your way of thinking, or get people to help you achieve your goals? There's much more to successful communication than the words you use. Read on to discover five secrets of outstanding communicators you can start using today.

Communicating means listening as well as speaking and good communicators listen deeply – focusing on what is being said, how it's being said, and sometimes even what's not being said.

'They listen with their ears, their eyes, and even their heart – so they can appreciate what the other person means,' explains career coach Ruth Winden of Careers Enhanced.

'Their secret is to give the other person their undivided attention, and not to let their own thoughts or emotions get in the way. Their whole aim is to listen carefully and to appreciate someone else's opinion. And only once the other person has finished, will they respond – but not before.'

It sounds simple, but is not always easy.

'It's a far cry from thinking that we know what the other person means, so we don't really listen, blurt out what we want to say, and score points instead,' adds Ruth.

When faced with a conflict situation, good communicators ask questions and seek to understand the other person's point of view, before they put their point across.

'If you take the time to understand where the person is coming from, you are more likely to find a solution. Unfortunately, many people are too busy defending their position to look for a compromise,' says Ruth.

If you are involved in a disagreement, let the person finish speaking and then feedback the gist of what they have just said.

'This ensures you have understand the situation correctly. Re-stating the other person's point of view (in a neutral way, you don't have to agree with it) will make them feel heard,' adds Ruth.

3. Be clear and specific

When asking someone to carry out a task, good leaders know the importance of communicating clearly. In his book The Language of Leaders, Kevin Murray relays a conversation with General Charles Guthrie, Chief of the Defence Staff between 1997 and 2001.

Speaking about the need to be specific and keep things simple, Guthrie said: 'I remember observing a young officer giving out his orders to attack something and he said: "We will capture hill so-and-so." And then he spoilt it all by saying: "We will then have a nine-phase operation."

'Well, in my experience, when you attack something it always goes wrong after the first phase and it's probably better not to have the debris of a plan that is not going to work cluttering your mind.'

As a manager, you may be challenged with complex projects that require you to think strategically, but when it comes asking your team to deliver, your job is to keep it simple.

You might have a powerful argument to make, but if people don't trust you or care about your opinion, your words will have little impact.

Good communicators take time to build the relationship before they state their argument or make a request, whether that's convincing someone to buy a product or come round to their way of thinking. Simply asking, "How was your weekend?" before you move to your work purpose, will make people feel valued – as long as you listen to their reply, of course.

'Don't just show an interest in someone when you want something,' warns Ruth. 'Pass the time of day with everyone in the office and show genuine interest in your team and co-workers. Many high achievers underestimate the importance of people skills – but in any business, people come first.'

5. Be a voice of positivity

No one can agree all the time, but good communicators chose their words carefully when they disagree. In some cases, it's as simple as saying "and" instead of "but".

Shaun Simmons, Managing Director of Cordant Technical and Engineering Recruitment specialists, adds: 'Try to avoid negative phrases, such as "I've tried that before and it won't work". Instead, replace "no's" and "won'ts" with positives such as: "What I can do is…" If you're seen as someone who provides solutions instead of problems you're far more likely to get ahead.'

Five toxic beliefs that are holding you back at work

We all have an inner dialogue – the little voice in our head that never shuts up – and what yours says can have a surprising impact on your career success. Over time, negative self-talk can erode your self-confidence, stop you from taking risks and prevent you from reaching your full potential. Read on for five self-limiting work beliefs and how to overcome them. Are you guilty of any of these? Toxic self-talk #1 "I don't have anything worth saying" Even if you don't have anything earth-shattering to say, it's important to add your voice to meetings. Ruth Winden, career coach at Careers Enhanced, says: 'Junior staff members often worry about speaking up in management meetings because they feel intimidated by their colleagues' seniority. 'A good organisation values different perspectives, whatever the level of responsibility and junior staff members might just hold the answers senior management needs to hear. 'If you feel nervous talking in meetings, the longer you wait to speak, the...

Five jobs for people who love helping others

Job satisfaction is about much more than salary. Knowing that you have helped someone in need or made a difference to someone's life can give you a real sense of achievement at the end of the day.If you enjoy helping people, here are five jobs you might want to consider.1. Family mediatorDivorce is one of the most challenging and upsetting experiences people will go through in their lives. Family mediators help divorcing or separating couples communicate with each other and agree on important issues, such as child residency, property and money, without having to go to court. To become a family mediator, you need to remain impartial and have excellent communication skills.Qualifications required: You will need to complete training approved by the Family Mediation Council to become a qualified family mediator. Many people taking the course come from family law, social science or therapy/counselling professions. Whatever your background, you will normally need to be educated to degree ...

Five jobs for people who love to argue

Some people dread the prospect of arguments at work and do their best to avoid them, but for others there's no greater thrill than successfully arguing their case or winning a debate. If you're outspoken, confident, and can stay calm in a conflict, we've found five jobs that might just suit you.BarristerThe film and TV portrayal of lawyers giving bombastic speeches in tense courtroom face-offs may be a stereotypical exaggeration, but the adversarial nature of the law makes it suited to those with good communication and advocacy skills who are confident at public speaking. Strong analytical skills are a key attribute for barristers, who specialise in representing people and companies in court. As well as actually appearing in court they must advise clients and evaluate their cases, devise legal arguments and negotiate settlements.Qualifications required: Those wishing to enter the heavily regulated profession must either achieve an approved law degree at 2:2 or above – or can take ei...

10 Ways to be more persuasive at work

You have great ideas, it's just a shame that management and your colleagues rarely get on board. The next time you need to win someone over, try one of these tried-and-tested persuasion techniques.1. What's in it for them?Before you present an idea, think about the benefits and challenges it offers the other person.'Articulate what's in it for them and pitch directly to their concerns or interests. How will what you're proposing further their goals or solve their problems? You don't need an exhaustive list, focus on no more than three main benefits,' advises Clare Whitmell who blogs on careers at JobMarketSuccess.com.'Identify any potential reservations they may have and come up with workable solutions and reassurances. Give them time to talk through their concerns - people like to have their say, so don't make your case in one big info dump.'2. Show how it's best for businessAt the same time, don't forget to look for the bigger picture pay-off when presenting an idea.'If you can sh...

5 ways to use ‘bridge days’ for career success

Many businesses close down during the quiet period between Christmas and New Year. If you're lucky enough to have some "bridge days" away from work, why not put them to good use? With a little smart thinking, you can maximise downtime during the holidays to help further your career.1. Network and send e-cardsThe festive period is a great opportunity to meet up with friends and ex-work colleagues you haven't seen in a while. 'While you're catching up on old times, you can share what is happening with you work-wise,' says Corinne Mills of careers consultancy Personal Career Management and author of Career Coach.'Perhaps they can be a sounding board for some of your ideas or give advice on your current career challenge. They might even know of some new opportunities or useful contacts for you to talk to.'Many jobs are never advertised, and often it's "not what you know, but who you know" that can make all the difference. According to a survey by career management consultancy Drake Beam...

How to create a new job at your current company

You enjoy your work, get on well with everyone in the office, and are happy with the company. The problem is, you've outgrown the job. Before you check out the vacancy boards, have you considered creating your own opportunity? Career coach Ruth Winden at Careers Enhanced reveals how to create a new job at your current company in seven easy steps. What's your great idea, and why should it matter to your employer? Before the company will consider creating a new role, there needs to be a genuine business need. Perhaps the organisation lacks an in-house training programme, or maybe they are losing customers as no one is resolving complaints on social media? 'What are the most pressing problems in your company that YOU can solve? Which opportunities can you spot that will help your company make more money or save more money?' asks Ruth. 'Look at your idea from your employer's perspective: to create any new role will initially cost money, it will take some level of re-organisation to fill...